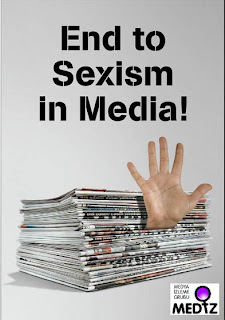 Campaign activities: Visual and press bulletins, conference of For a Nonsexist Media and research on Forms of Representation of Women in Media are in book of “End to Sexism In Media”. Book is distributed in september to whom are interested...

We started our campaign “End t Sexism in Media” by saying "Page three girl" in papers, "Victim" or "Monster" in women's talk shows, "Selfless Mother", "Good girl" or "Femme-fatale" in TV serials, Wrapped in "Flag" or "Veil" on politics pages, and generally "Backstage" and "Invisible" Enough is enough!. Book of “End to Sexism in Media” which includes campaign activities -presentations of conference “For a Nonsexist Media” and research on “Forms of Representation of Women in Media” -has published.

End to Sexism in Media! campaign aims to contribute to;

-the creation of media where women do not undergo violation of rights, exposure and gender discrimination,
-the prevention of the representations of women around traditional roles such as victims, sexual objects, holy mothers, symbols of honor, and as a second sex dependent on men,
-the prevention of women from being ignored in the arenas of politics, economics and international relations, which fall outside the magazine and 3rd page news,
-encouraging women to be represented in media with their various skills, professions and sides in a balanced manner,
-giving place to women in "head"s (administration) and "corner"s (column, commentaries) where men dominate almost all,
-composing media ethics which is not sexist by discussing with all the respondents,
-thus play a role as an altering/transforming medium.

Except visual and press bulletins of campaign, you could find

-Research on “Forms of Representation of Women in Media” includes two weeks research which watches violations of women's rights, discrimination and sexism forms in media by following television and radio channels, daily newspapers and web sites.

-International conference "For Nonsexist Media” which is held in Istanbul Bilgi University - Dolapdere Campus on the 3 - 4th of May; we discussed how media can be non-sexist with media managers and workers, media watch groups and agents from feminist media, academicians, women journalists and women organizations

in book of “End to Sexism in Media”.

We started to distribute campaign book of “End to Sexism in Media” that is prepared with support of European Commission within the framework of European Initiative for Democracy and Human Rights, Friedrich Ebert Stiftung, Mama Cash and Global Fund For Women. Those who are interested can provide the book without any charge...

We wish to work all together with you for a media without discrimination against women...